What more radiocaesium! Yes, we have lots of examples using radiocaesium. This one relates to a model published by Absalom et al (2001) and later revised by Tarsitano et al (2011).

The model is a useful example as it illustrates the use of variables replacement (also known as model reduction, or model simplification). This is a useful method to test whether the structure of your model is really justified by the observations you have. OpenModel was developed into its current form largely because of work to develop the idea of variable replacement so it seems sensible to show an example. We have chosen the Absalom model of radiocaesium uptake from soil to plant as this model was exploited heavily in the development of variable replacement and this work is reported by Crout et al (2009) and Tarsitano et al (2011).

The principle is simple. Selected model variables are fixed to a constant value within OpenModel and the performance of the model assessed using a merit object. If a variable is important in the model one would expect that when it is set to a constant we will obtain a poor fit to the observations.

An example result is shown below. The residual sums of squares are plotted for the individual replacement of several model variables. The dotted red line marks the value for the ‘full’ model (i.e. when no variables are replaced). The striking finding is that the replacement of several variables has no adverse effect on the ability of the model to reproduce the observations. Indeed the agreement actually improves when some variables are replaced by constants. So what? So, the model structure is perhaps not doing quite what the model developers hoped! 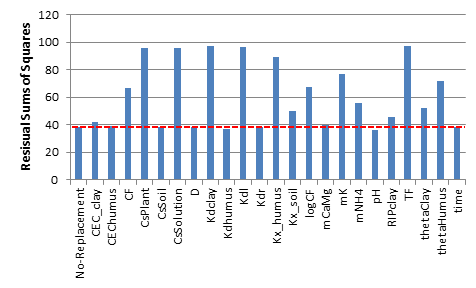 It is often the case that interacting effects are found between the variables replaced. Therefore OpenModel provides methods to explore different combinations of replacement variables. In the case of this model these reveal several permutations of the replacement variables which improve the model agreement with observations. These must then be interpreted in the context of the model design. For the Absalom model this is discussed in more detail in Crout et al (2009). The key point is the identification of several aspects of the model which add unnecessary uncertainty to the predictions. Tarsitano et al (2011) extends the analysis, using the outputs to guide a re-design of the model.